FISHERS, IN / ACCESSWIRE / October 1, 2019 / American Resources Corporation (NASDAQ:AREC) (the "Company"), a supplier of raw materials to the rapidly growing global infrastructure marketplace is pleased to announce that the Company has closed on the purchase of majority of the assets of Perry County Coal LLC ("PCC") through a wholly owned subsidiary of American Resources named, Perry County Resources LLC ("PCR").

American Resources acquired specific assets from Cambrian Holding Company, Inc. ("Cambrian"), which entered into chapter 11 bankruptcy protection on June 16, 2019. The assets were acquired free and clear of all liens, claims, interests and encumbrances, and assumed no liabilities other than $9,614,000 in reclamation bonds and other non-material contractual liabilities. The structure of the purchase of these assets was governed by the court-supervised process under Section 363 of the U.S. Bankruptcy Code.

The Company has also negotiated to receive cash consideration at closing of $250,000 in addition to payments of the next two payroll cycles of the PCR operations, which equates to approximately $1.5 million. The payroll obligation will be repaid to the lender, an affiliate of one of the other purchasers of the Cambrian assets, at the end of 12 months in addition to a four percent annual interest rate.

The structure of the deal enables American Resources to focus on operational efficiencies and allows the Company to maximize investment and resources for upgrading the complex and ensuring the productivity of the workforce as detailed below in the "Strategic Plan of Action" section.

"This acquisition is a significant step for the Company as it expands our presence in the global infrastructure market," stated Mark Jensen, Chairman and CEO of American Resources Corporation. "The assets of Perry County Resources fit extremely well within our current platform, both geographically and strategically. We're confident that our efficient, low-cost operating structure will enable us to improve performance and enhance profitability, which will set these assets up for long-term success and provide the world with a high-quality resource for infrastructure development, while also providing long-standing stable employment for the hard-working men and women at these operations. Additionally, some of the ancillary service assets of Perry County Resources will provide valuable synergies allowing us to reduce costs across our entire platform."

Part of the attractiveness of the PCR complex is the quality of its existing workforce. As American Resources prides itself on job creation and preservation and as they evaluated the PCR complex and operations, the Company believes the quality of the team onsite is of the caliber that the company currently employs. The Company will work with the PCR personnel to integrate it expeditiously into American Resources' platform and implement its "Strategic Plan of Action".

The PCR assets include the Davidson Branch Preparation Plant, capable of processing 1,300 tons of carbon per hour, over 300,000 tons of on-site carbon storage, and batch weight rail loadout with access to the CSX Railroad. The preparation plant is also capable of producing stoker and mini-stoker products for various industrial customers. The complex has the flexibility to ship via rail, barge or truck, and has a longstanding track record of serving both domestic and international markets. Historically, the PCC complex has produced approximately one million tons of carbon per year and consists of the critical processing and logistics infrastructure necessary to serve these markets efficiently.

The rail loadout at the Davidson Branch Preparation Plant is a four-hour batch weigh unit train loadout connecting to CSX Transportation. While CSX typically requires unit trains (of 100 to 110 rail cars), the loadout at PCR allows for up to 135 rail cars to be loaded, giving additional flexibility when it comes to targeted customers. The loadout is rated at 4,000 tons per hour and has a state-of-the art weighing system for quick and efficient train loading. Carbon qualities can be blended from three clean coal stockpile prior to loading, giving PCR added flexibility to meet various customer specifications.

Prior to closing the acquisition, the complex consisted of three active mines (two underground mines and one surface mine) with access to over 110 million tons of carbon deposits consisting primarily of PCI, high-quality semi-soft coking and industrial stoker carbon. Significant infrastructure has been invested in the two underground mines, which access a large boundary of semi-soft coking and PCI carbon. Current 2019 contracted positions from the complex range from $82.70 per ton to $99.43 per ton. 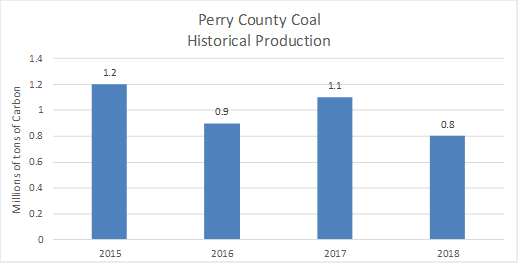 PCC has been operating four continuous miners (in the form of 4 single-section miner operations) between two deep mines (the E4-1 mine and the E4-2 mine). The goal of the Company is to relocate the workforce from E4-1 to E4-2, thereby allowing PCR to operate four continuous miners at the E4-2 mine, with a target of increasing to five continuous miners within 12 months. The Company is simultaneously enacting a plan to convert the operating sections at E4-2 from single-section mines to running super-sections, which will result in significant efficiencies and production enhancements.

This project will enable American Resources to focus on and extract efficiencies through:

The goal of the Mine Consolidation Project is to maximize the return on capital by focusing all of the Company's efforts on increasing the efficiencies at the E4-2 mine while ensuring the workforce has the necessary tools and equipment to hit the Company's operational objectives at the PCR complex. Additionally, by allowing the team to focus on one mine versus two, efforts can be laser-focused on maximizing the PCR complex's productivity. Once the Company's Mine Consolidation Plan is implemented and the E4-2 mine is consistently meeting internal productivity standards, American Resources will reevaluate the potential of other mines in the region.

American Resources Corporation will host an investor call to discuss the acquisition followed by a Q&A session. The call will be held on Wednesday, October 2, 2019 at 10:30 am, EST. Interested participants can dial-in to the following number:

A presentation overview of the Perry County Resources acquisition is available under the Investor Relations section of the Company's website:
http://americanresourcescorp.com/investor-relations

American Resources Corporation continues to focus on its growth objective by efficiently leveraging its large number of core mining permits and through identifying strategic, supplemental acquisitions. The Company is committed to being one of the lowest cost operators in the Central Appalachian basin (CAPP) and throughout all its coal mining, processing, and transportation operations.

American Resources Corporation is a supplier of raw materials to the rapidly growing global infrastructure marketplace. The company's primary focus is on the extraction, processing, transportation and selling of metallurgical carbon and pulverized coal injection (PCI) to the steel industry. The company operations are based in the Central Appalachian basin of eastern Kentucky and southern West Virginia where premium quality metallurgical products are located.

The company's business model is based on running a streamlined and efficient operation to economically extract and deliver resources to meet its customers' demands. By running operations with low or no legacy costs, American Resources Corporation works to maximize margins for its investors while being able to scale its operations to meet the growth of the global infrastructure market.